Recently, I received the following message via my Dancing Dog Massage Facebook page: “Hello, Gene! My name is Joel Rockey, and I run an organization called One Last Treat. I have an old boy that I want to get massaged and film it for my organization. He is 16 years old (with health issues) and won't be around much longer, so I wanted to see if I can schedule something with you. I would be driving a couple hours to see you so we would have to meet in a park or something like that if you don't have an office. Let me know what you think after looking at our organization.”

Needless to say, this really pulled at my heartstrings! For starters, I visited the One Last Treat Facebook page, as well as their website. Here is what I learned: One Last Treat™ was founded by a group of veterans who wanted to continue service after the military. The organization's mission is to provide comfort, compassion, and one last treat to severely at-risk and soon-to-be-passing shelter animals. By providing a service that most people could or would not be able to, they hope to give these animals what they’ve never had in their final moments, and ultimately bring light to the fact that there is such a thing as too late for these shelter animals and many more like them. They strive to bring strong leaders and animal advocates back to the communities that need them most.

I soon discovered that the dog in question was a Chihuahua named Bandit. Bandit the Chihuahua was living with an 80-year-old lady and 20 other dogs in Mohave, California. When the owner suddenly passed away, there was nobody to take care of her dogs. Marley's Mutts stepped in and took Bandit to the Tehachapi, CA clinic, where he was being held for seizures and a heart condition. It also didn't help that Bandit is 80% blind and deaf. He was not in good shape at all and it was looking like he would have to go to the shelter or be put down. Joel stepped in and adopted him as his own. During the weeks since his adoption by Joel, Bandit has his bad days (seizures) and good days! Considering his old age and medical condition, Bandit isn't expected to live too much longer. Yet Joel was determined to keep Bandit happy until that final day.

Just the thought of Joel driving with Bandit for nearly 2 hours from Tehachapi, CA to Los Angeles, CA was enough for me to offer Joel a free canine massage therapy session for Bandit. I was also concerned that a park setting might be too distracting, with too many potentially unwanted variables to deal with. I wanted Bandit's massage session to be as perfect as possible, so I suggested that we do it in the comfort of my own apartment. Joel happily agreed and we set up a weekend appointment. When the big day came, I was actually a bit nervous. I wanted the experience to be a special one for Bandit and I knew that Joel would be filming it as well. When they arrived, I was immediately at ease with Joel, and Bandit's sweet-tempered canine spirit set a wonderful tone for the session. I was so thrilled that Bandit took to the massage right away, and was putty in my hands in no time! He really seemed to enjoy every moment of his 30-minute session, and when it was over he didn't want to leave the mat. Below is the video that Joel created to document Bandit's big day with Dancing Dog Massage.

Seeing Bandit feel like a puppy again is something that I will always cherish and never forget. It was truly a special day for Dancing Dog Massage!

Since Bandit's Big Day with Dancing Dog Massage, Joel says that (in addition to roasted chicken and heater blankets) massages are now one of his favorite things!

The Pleasure and Importance of Focused Dog Walking

Massage Therapy is Good for ALL Dogs!

The Benefits Flow in Both Directions 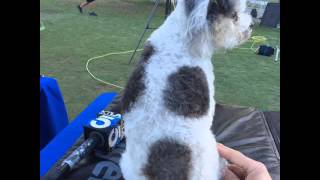 When a Dream Becomes Reality!